Better visualization alone does not constitute better understanding. I have seen people give examples of Playfair'sWilliam Playfair was a scottish engineer and a political economist who is credited with inventing new data visualization mediums like pie chart, bar chart, line chart, area chart. See: Commercial and Political Atlas genius in inventing a new visualization mediumArea Chart from CPA 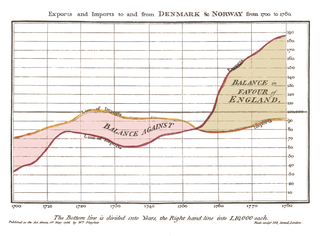 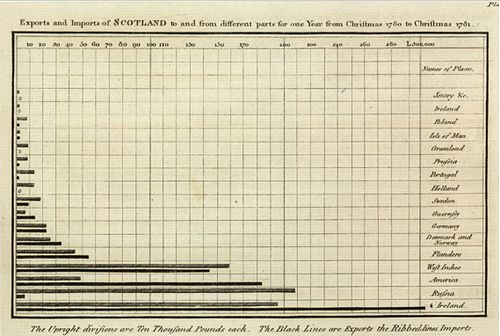 Source: commons.wikimedia.org that changed the landscape of how statistical entities were percieved and that of Parc's initiatives with interactive mediums like a GUI, Hypertext etc, but what is lost in this extrapolation is the idea of catering to the organic emergence of these mediums in bettering people's understanding of the underlying concepts/ideas. To continue along the same line, except for the fanatics and ardent followers no one adopted these technologies up until they were pursued decades or in some cases centuries later by people who improved upon it to make it blendable/integrable enough a medium.

I have a serious problems with understanding graphs and charts in general. Although I am usually awed by the innovative depiction of an idea through such mediums, it never feels quite natural to me. This is to say that I work with quantitative data well when they are either purely textual like a table with raw data or synesthetic like bag of 10 blue balls. On the other hand, I have tremendous problem understanding symbolic elements like groups, fields, rings, categories, etc when presented in purely textual medium like a meatball of symbols. Most of the effort at least in the educational sector seems to be going towards better visualization like animating geometrical shapesPoincare Ball Projection

Credit: Zeno Rogue, Twitter. Mesmerizing isn't it? Good luck understanding it unless you know something about Hyperbolic geometry. instead of better understanding. Although intiatives like brilliant, explorables, mathigon, khan academy deserve every bit of respect and admiration they are getting, I think what we need is a more courageous combination of emulatory as well as simulatory intiatives like Dynamicland or things that exhort fundamental perceptive shift like smartphones etc instead of just animations being thrown around.